I probably should start off by saying that I 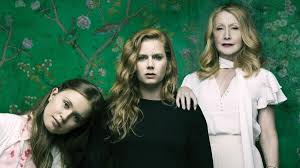 loved the book. Seriously. I read Sharp Objects several years ago and protagonist Camille Preaker is a character that has stayed with me since.  I’ve often wondered where she would end up and if she could ever allow herself happiness. I certainly hope so.

Keep that in mind as I share my thoughts on the limited TV series.  Part of me almost wishes I hadn’t read the book so I could have had an unbiased view of the limited run HBO adaptation. I don’t mean to sound like I didn’t like the televised version of the story, I did. But that didn’t stop my constant comparisons to the book, to which frankly the show came up wanting.  At least in my opinion.

Before I get into the details I should say that Sharp Objects tells the story of a St. Louis journalist, Camille Preaker, who travels back to her hometown Wind Gap, Missouri to report on the murder of two young girls. The town has it’s secrets and so does Camille and her family.  Dysfunction abounds in Camille’s rather tragic history.

There is a lot to admire about the TV show. The setting was gorgeous and beautifully shot. Camille’s home town, small town residents, and family residence were perfectly realized. What a house! What a location! What a bunch of characters! The acting was stellar throughout, though I didn’t always agree with casting choices or how certain characters were played (more on that later). The story changes were minimal and made sense to a degree, with one glaring exception. And the story itself was mostly engrossing, though it dragged during the first few episodes and barely matched the creepy malevolence of the book except perhaps in the last two episodes.

As much as it pains me to say this…

Long story short – Adora was bad, Amma was badder, and poor Camille is left devastated by her family for the second (though likely last) time.  I’m not against this ending but the series completely mishandled how it drove towards its conclusion.  Let me explain.

In the beginning Amma was clearly marked as a highly likely suspect, so much so that she seemed like a red herring.  Amma was a spoiled and nasty high school Queen Bee but a murderer of little girls? That seemed somewhat far fetched. A few men were thrown into the mix of possible suspects but because the entire community thought they were guilty, obviously they weren’t. Neither had any identifiable motive other than being men related to the dead girls and one had the unfortunate label of an outsider. In a town as small as Wind Gap horror couldn’t possibly come from within, could it?

Toward the end of the series, and after a plodding six episodes where nothing much happens besides Camille’s hard drinking and questionable choices, a serious suspect finally emerges.  Apparently, Camille and Amma’s picture perfect mother is not the picture of perfect mental health. Years ago, a third sister – the universally sweet and beloved Marion – died tragically young after a long, mysterious illness.  Marion’s death was a major factor in Camille’s long, slow and rather apathetic decline into immolation.  Turns out, Marion’s illness wasn’t so mysterious and was caused by her doting mother Adora.  A woman who’s need to be worshipped drove her to intentionally poison her daughter so that she would deified as a selfless mother dedicated to the care of her doomed child. More specifically, Adora suffered from Manchausen by Proxy syndrome.

Both Camille and Richard’s independent investigations lead to the same place and Camille is determined to confront her mother for Marion’s death, and presumably for the murdered girls. She does so and nearly gets herself killed in the process. A welfare check on Camille by her concerned editor leads to the discovery of sickly Camille and Amma, bodies chock full of poison, along with a tool definitively tied to the murders.  Case closed, yes! But, uh, no because – MAJOR TWIST – while Adora was guilty of murder and attempted murder of two of her daughters, her third daughter Amma is the murderer of the other little girls.  This fact is dropped during the last ten seconds of the series before fading to black. Very Sopranos, yes? Well, not quite because some additional information is provided in two very brief end credits scenes that leave no doubt of Amma’s guilt.

Admittedly, there were plenty of hints during the series that Amma could in fact be the killer. The big miss in the TV series was the lack of clear motive. The book describes Amma’s pathology beautifully but the series did not adequately address, making the ending feel cheap, unearned and far too abrupt.  Odd, since other parts of the series dragged on and on with no real point.

Did Adora know Amma was the killer?  Both the book and TV show left this ambigous but it’s my feeling that, yes she did.  That partially explains the TV show’s bizarre subplot involving Adora’s affair with the chief of police.

Did Alan know Adora was a killer? Alan knew Adora was sick and needed to be worshipped. I believe he knew that Adora was responsible for making Marion sick but did not believe she killed her, at least not on purpose. A tragic accident if you will.

Did Adora murder Marion intentionally? No, I don’t believe that Adora wanted Marion to die. She enjoyed mothering her too much, along with the sympathy & admiration she got for caring for such a sick child. I believe Adora loved Marion in her own twisted way.

Several people close to Adora mention she was abused by her own mother as a child. Is this true? Unclear, Adora lies through her teeth but it’s probably likely.  Adora’s pathology had to come from somewhere.

Why didn’t vicious Amma turn against her twisted mother? Book Adora was far too dangerous, intelligent, and seductive to cross, but TV Adora should have been easy for Amma to overcome.

Will Camille ever fully recover from her tragic family backstory? Perhaps, but she will likely lead a very solitary life. If nothing else, I hope she finds some well earned peace.

Book lover who moonlights as a part-time & sporadic blogger/writer. View all posts by kera0603